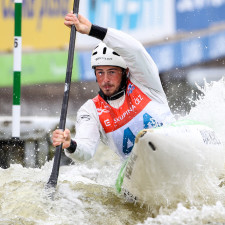 Yesterday, DCC Slalom paddler Daniel Watkins gained a 2 second penalty that placed him just shy of qualifying for the finals at the third ICF Slalom World Cup in Liptovsky Mikulas, Slovakia.  It was a solid run with a raw time that was .3 secs ahead of compatriot Jaxon Merritt who qualified in the second heat in 6th place.  With the 2 second penalty added, Watkins was relegated to 15th in the second heat – showing just how tight the competition is.

But that was yesterday!

Today, in the single run teams event, with Lucien Delfour and Jaxon Merritt, the Aussie Mens K1 team has taken out 1st place with a clean run in 104.77 seconds.

Despite being a mere 0.44 seconds ahead of a polished Polish crew, also with a clean run, this was certainly a deserving win.  Slovenia came in third, also with a clean run.  Both the Polish and the Slovenian teams had excellent runs with superb teamwork, on a course that was a combination of tight moves interspersed with open fast sections.  For teams, three sections were very challenging, with weaving and spins required in eddies just big enough for one boat.

The 3rd World Cup hosted in Slovakia was also DCC paddler Kate Eckhardt’s debut onto the senior world cup circuit.  Whilst not quite fast enough to qualify for the finals, Kate managed to put two clean runs down demonstrating her capacity to step up and mix it with the World’s best.