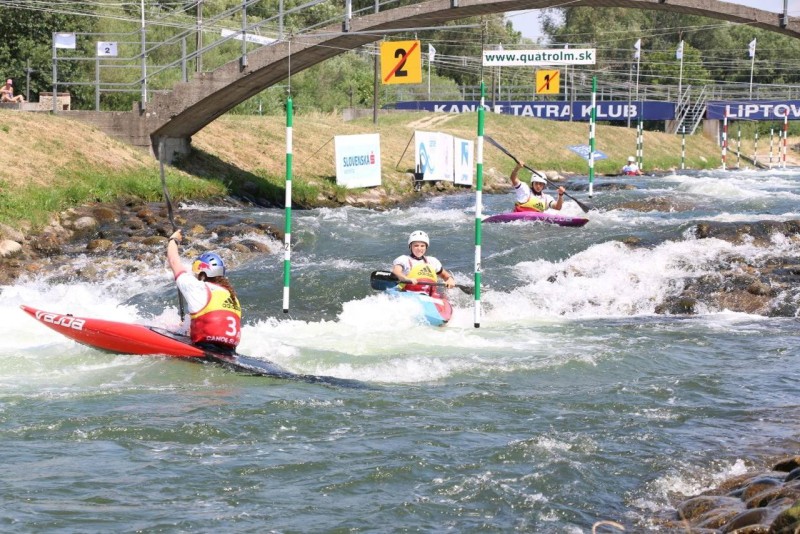 Kate Eckhardt and Daniel Watkins have now both got their first medals at a senior World Cup.  Daniel on the Saturday teamed with Lucien Delfour and Jaxon Merritt to win the Mens K1 Teams event.  The next day, Kate Eckhardt teamed with Noemie and Jessica Fox in the Womens K1 Teams and managed a clean run for third place.  The event was taken out by the locals – Slovakia and in second, the almost locals, Czech Republic – two of the powerhouses in Canoe Slalom.

Going clean in teams is always a great achievement.  Not only does a paddler have to take in all the nuances of the white water, there are two other boats to avoid, requiring frequent adjustments to speed and line – being just the right distance apart for efficient weaving.  The Liptovsky course for the finals was very tight for teams in three places where the eddies where short and fast – a real challenge for teams.

For these two DCC paddlers to be part of fast and clean teams runs at a Senior World cup level, is a credit to them both and bodes well for their future in the sport.

The DCC pair have more racing ahead.  For Daniel, this will culminate with his debut at a Senior World Champs in London in September.

A link to the video of the Mens K1 teams action (they are team number 8) is in the previous DCC news item.